Home This Week in History

This Week in History 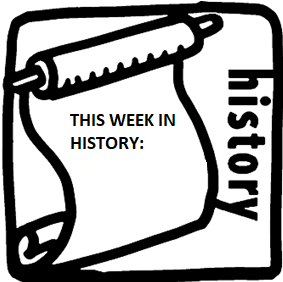 This Week in History [ 21st SEPTEMBER to 27th SEPTEMBER ]

21st September 1792 – The next National Convention declares France as Republic and abolishes the monarchy.

21st September 1995 – The Hindu milk miracle occurs in which statue of Hindu God Ganesh began drinking milk when spoonful were placed near their mouths.

22nd September 1893 – The first American made automobile built by the Duryea brothers was displayed.

22nd September – In Europe and in cities throughout the world car free day is observed.

25th September 1906 – In the presence of King and before a great crowd Leonard Torres Quevedo successfully demonstrates the invention of Telekino in the port of Bilbao guiding a boat from the shore in what was considered the birth of the remote control.

26th September 46 BC – Julius Caesar dedicate a temple to his mythical ancestor Venus Genetrix in accordance with a vow he made at the battle of fossils Pharsalus.

26 September 1984 The United Kingdom agrees to handover of Hong Kong.

27th September 1777 – Lancaster, Pennsylvania was the capital of United States for one day.